You’ll see many pages on this site devoted to work we have done for Aberdeen City Council. This is where it began, and that is why we’ve shown this project on the site.

OpenBoxDesign was commissioned to create the programme for the Aberdeen Storytelling and Theatre Festival in 2006. They wanted a design company to work with a leading illustrator in the industry and therefore wanted to ensure that the design reflected the quality of the artwork. The Illustrator commissioned was Sara Fanelli, and you can see more of here work at www.sarafanelli.com. 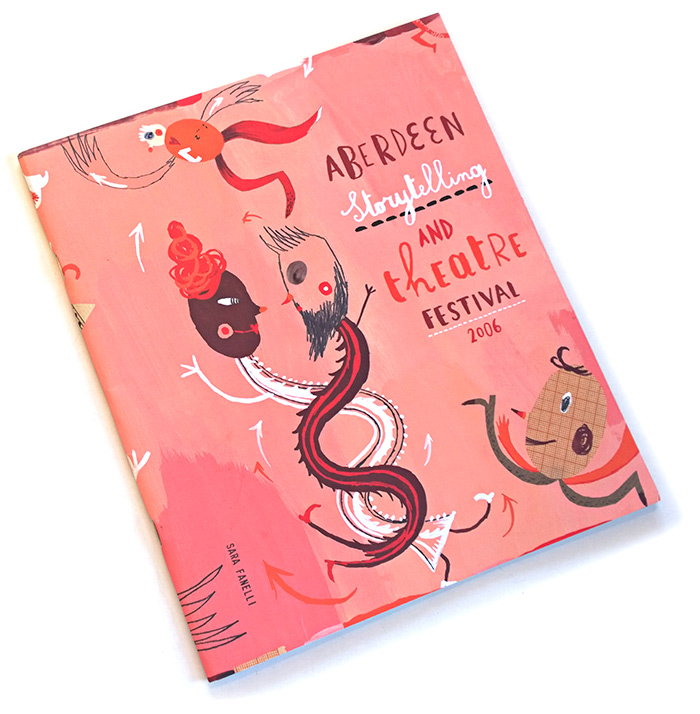 It was an ambitious start. The festival itself (which has now morphed into the ‘Arts Across Learning Festival’) is a highlight of the creative calendar in Aberdeen. Events are held in schools and public venues around the city over several weeks. Pupils from Schools are the majority of viewers, but by no means exclusively, and the festival feeds directly into the curriculum.

OpenBoxDesign devised the sorting and keys for the programme to ensure that specific events were easy to locate and reference. A pull out calendar was also incorporated into the design. The layout, colour and typography took it’s cues from Sara’s wonderful designs.

The festival programme was a resounding success and because of this we have been commissioned to produce the festivals and reports for all subsequent years. It’s been, and alway will be, a pleasure to produce this work.

A special mention should go to Sara Fanelli for being a truly original artist. Her commissions and solo projects speak for themselves. She’s worked all over the world and you will see her award-winning work everywhere from Pizza Express to Tate Modern. She was also a joy to work with.